The electric grid in the United States has evolved over the past century from a series of small independent community-based systems to one of the largest and most complex cyber-physical systems today. The grid consists of thousands of generators and substations, linked by transmission and distribution networks. The system state is estimated from sensor data collected at remote locations, and the delivery of power is orchestrated by sophisticated decision and computation processes. Markets are involved intimately in the operation of the grid. Despite the enormous practical challenges of real-time delivery of energy, the supply of electricity has been mostly reliable with a few well-publicized exceptions of regional blackouts. The established conditions that made the electric grid an engineering marvel are being challenged by major changes, the most important being a worldwide effort to mitigate climate change by reducing carbon emissions. Within the United States, the national goal of achieving energy independence calls for significantly reducing the reliance on imported oil. Through education and, more directly, from price tags at the pump and utility bills, the public is now increasingly aware of the needs for saving energy proactively. The electronics and information technology industries, previously unengaged in the power and energy sector, are positioning themselves for the dawn of the smart grid era that some predict will rival the internet revolution of the past decades. The investments by Google in offshore wind, IBM in Smart Planet, and Intel in Home Energy Management (HEM) are some of the examples that represent the enormous commercial interests in a largely underdeveloped market sector.

The U.S. government has set a target of reducing the national emissions of greenhouse gases by 80% from the current level by the year 2050. Achieving reductions of this magnitude will require a combination of greater dependence on renewable energy, developing more decentralized energy sources and control capabilities, the electrification of the transportation sector, and much improved energy efficiency for buildings, appliances and equipments. Transformative (and potentially disruptive) changes to the current structure of the energy industry may be necessary, and critical technological innovations are required.

This research investigates key aspects of a computation and information foundation for future cyber-physical energy systems – the smart grids. The overall project objective is to support high penetrations of renewable energy sources, community based micro-grids, and the widespread use of electric cars and smart appliances.

On computation architecture for smart grids, we propose to study a cloud computing architecture for the scalable, consistent, and secure operations of smart grids. The proposed research aims to quantify fundamental design tradeoffs among scalability, data consistency, security, and trustworthiness for emerging applications of smart grids. Data latency and trustworthiness are studied in the context of grid state estimation and control. New software tools will be developed for suitable cloud platforms. 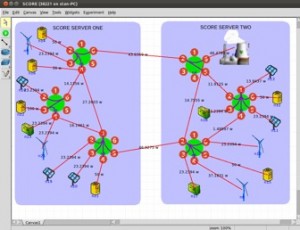 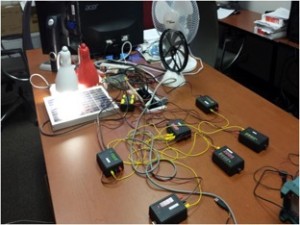 We propose to develop an open and scalable experimental platform (SmartGridLab) for empirical investigations and testing of algorithms and concepts developed in this project. SmartGridLab integrates the hardware testbed with a software simulator so that software virtual nodes can interact with physical nodes in the testbed. Software modules that emulate an interface between the physical grid and the cloud are developed. The proposed research and education platform enables the evaluation of performance and scalability under realistic communication constraints. 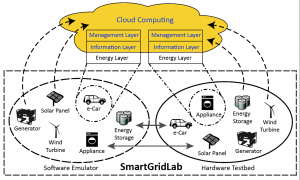