Structures like buildings, bridges, dams, roads, nuclear power furnace, etc. are critical components of the economic and industrial infrastructure. However, these structures are aging with years and are also subjected to harsh loading scenarios and severe environmental conditions that are not foreseen during the design and construction. The monitoring of the integrity of these structures and pinpointing the existence and location of any damage could measurably lengthen the structures’ lifetime, reduce operational cost and improve overall public safety. This is the objective of structural health monitoring (SHM). 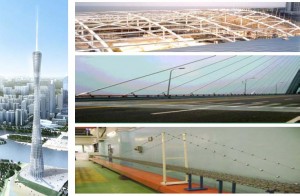 Depends on different applications, SHM technologies may include collection and analysis of vibrational, acoustic, magnetic, ultrasonic, X-ray and infrared thermography signals. For example, the monitoring of high buildings and long span bridges generally require vibration data, and the monitoring of nuclear power furnaces, on the other hand, often involves the measurement and analysis of radioactive and X-ray signatures. The collected information can either act alone or together to provide a detailed picture of defect sources and life expectancy of the subject.

There are two primary models for data acquisition in SHM today: manual data collection and fully integrated online system. The manual model utilizes hand-held instruments (e.g. X-ray machines) and remote-installed or hand-carried sensors to which instruments are connected. Data is captured locally in the hand-held device for transport back to a central repository for analysis. On the other hand, online SHM system utilizes sensors that are hard-wired to a central repository where the data is stored and processed. Both manual and online systems are in place across a variety of applications and have advantages and disadvantages. Manual data collection is often insufficient or even impractical in many applications due to the potential for user error, the manpower required for frequent data collection, and the inaccessibility of the test points. Online systems, on the other hand, allow more reliable and frequent data collection. However, they do not scale well when used for large-scale system implementation such as in bridges and buildings due to the prohibitive installation time and costs. For example, Lynch reported that installation time of a moderate size monitoring system can consume over 75% of the total system testing time with installation costs approaching over 25% of total system cost. In the state of California, 61 of the state’s 22,000 bridges have been instrumented with costs reported to be well over $300,000 per toll bridge for a 60-channel system. A large portion of this cost includes the laying of conduits needed to protect wires from harsh weather conditions at a cost of $10 per linear foot. It is also reported the cost of more than $16 million (about $27,000 per channel) to install over 600 sensing channels upon the Tsing Ma suspension bridge in Hong Kong. Moreover, when the total number of sensors of a SHM system increases, the cost of the SHM system can grow much faster than at a linear rate. This fact limits the spatial density that sensor nodes deployed in SHM systems can achieve. As a result, the nodal densities of most SHM systems are generally low (often, only 10-20 sensors are installed in a single structure). Such small numbers of sensors generally may not able to provide adequate spatial information for damage detection algorithms. Finding a solution to address these problems is therefore, quite urgent and necessary.

Recently, with the rapid advancement of key technologies such as sensors, microprocessors and wireless networks, wireless sensor networks (WSNs) have become an increasingly compelling platform for SHM applications. The most important property of the WSN-based SHM systems is the inclusion of computation and wireless communication into the sensing units (i.e. smart sensors). Compared with the existing wire-based SHM systems, the low cost of the WSN-based SHM systems in installation, equipment and maintenance is a tremendous advantage. Krishnamurthy reported that the cost of installation of a wireless SHM system is less than half of the wire-based counterpart. Another advantage of the WSN over existing wired network is the higher spatial density of sensor nodes. Compared with wire-based SHM systems, WSN permits a much higher spatial density of sensors by replacing cables with wireless communication. The total number of sensors deployed in a WSN can reach hundreds or even thousands, which have the potential to greatly enhance the quality of results that can be achieved.

Due to its low cost, high scalability and easy of deployment, wireless sensor network (WSN) has been considered to be the next generation paradigm of structural health monitoring (SHM) systems. In the past several years, researchers have devoted considerable efforts and some preliminary prototypes of WSN-based SHM systems have been developed. However, constrained by the intrinsically low wireless bandwidth, limited node resources and lack of efficient coordination mechanism, the existing systems often fail to satisfy stringent SHM requirements such as high frequency (over kilo Hz) and strictly synchronized sampling (within microsecond), high throughput of processing and transmission, low packet loss rate and some real-time constraints. Moreover, most of the existing systems are application-specific and can hardly be applied to structures with different characteristics and/or in different environmental conditions. To address these problems, we aim to develop a versatile high-performance WSN platform for SHM applications. This platform can satisfy most of the stringent SHM requirements. Moreover, it is flexible and supports on-line configuration of parameters or mechanisms to address requirements of various SHM applications. The high performance and wide-range applicability, along with the intrinsic advantages of WSNs, will make it a perfect platform for various SHM applications.

More information of this project is at PolyU’s iTransNet.